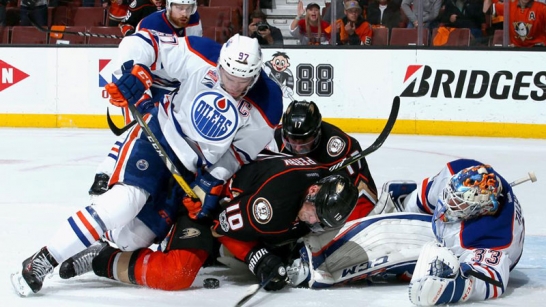 With the NHL lurching from one inexplicable goaltender-interference call to another, the hockey world is eyeing next week's general-managers meetings as the saving grace.

The trouble is, the system works against a solution.

It is only in rare circumstances that rules suggestions to come out of the annual GMs meetings, which run from March 19 to 21 in Boca Raton, Fla., are rushed into law during the current season. Any suggested rule changes usually are sent in early June to the league's NHLPA/NHL competition committee, which is made up of players, GMs and a few coaches who are non-voting members. The committee recommends which ones should be adopted.

Then both the NHL's board of governors and the executive board of the NHL Players' Association have to officially approve the changes, which they usually do. But that is not until late June, which means the changes go into effect the following season.

However, the referees' apparent inability to decide on a consistent standard for goaltender interference, and the coaches' limited ability to challenge the call on the ice, has the NHL in an uproar. The incidents are happening so often now that coaches and players outraged by a call in one game are often the beneficiaries of a call in the next.

Fresh from their latest alleged injustice last Monday in Buffalo, the Toronto Maple Leafs saw a Pittsburgh Penguins goal overturned Saturday night at Air Canada Centre in their 5-2 win over the visitors. This time it was Penguins head coach Mike Sullivan who called the referees' decision "a joke" and said angrily it is something "the league has to try and iron out."

The first is rule 69, which defines goaltender interference, and the second is rule 78.7, which lays out the circumstances in which coaches can challenge a referee's call.

The problem with rule 78.7, which allows a coach to challenge a goaltender-interference call in some situations, is that if a penalty is assessed to the offending team on the play no challenge is allowed.

Since there is no easily defined consensus about what exactly is intentional and unintentional contact under rule 69, and the standard seems to shift from call-to-call, teams are increasingly unhappy. The unhappiness is increased because a penalty can cut off the only avenue to appeal under rule 78.7.

Hence the Penguins' anger with two minutes left in the second period on Saturday night. The Leafs held a 3-0 lead but the Penguins had them on the run. Pittsburgh's Brian Dumoulin jammed the puck behind Leafs goaltender Frederik Andersen as he was pushed into him by Leafs defenceman Ron Hainsey.

Not only was the goal disallowed, Dumoulin was issued a penalty for goaltender interference. Mitch Marner scored on the ensuing power play to give the Leafs a 4-0 lead and the fun began.

"It's a huge issue in the league," Sullivan said. "It's been discussed all year long. It seems every week this issue gets raised.

"It's a challenge the league has to try and iron out.

"I know it's being discussed, and everybody's got to try to do their best to clarify the language and the criteria or whatever it might be. Because, right now, I don't think anyone really knows what is goalie interference and what isn't."

This time around, Leafs head coach Mike Babcock got to play the fellow taking the high road.

"The greatest thing about all of this stuff is I've had enough of my own issues with this stuff and it does you no good to talk about it," he said.

Five nights earlier, when Andersen was knocked flat and a Sabres goal was allowed to stand, it was a different story.

"That is goalie interference any way you look at it," Babcock said then. "That tonight, the goal is off, and the coaches in the league? No one knows what's going on. So we better get it solved.

Alas, that does not appear to be in the cards. At least not until next season. Sportsnet's Chris Johnston recently reported sources told him NHL vice-president of hockey operations Colin Campbell expects the issue to be discussed at the GM meetings, but in the meantime coaches and managers should keep quiet.

And NHL commissioner Gary Bettman insisted at the annual all-star game the system works and "we've gotten to the point where everybody's overthinking the review."