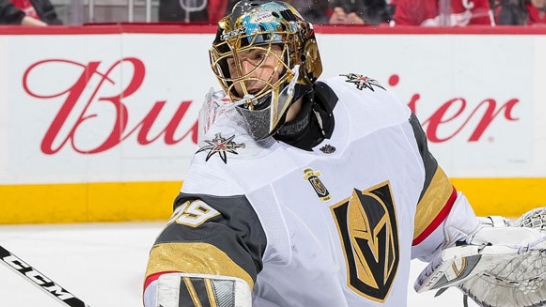 Naming the number of practical jokes he's pulled on teammates since posting his first NHL win, a 4-3 Pittsburgh Penguins victory against the Detroit Red Wings on Oct. 18, 2003?

"That's really hard to say," Fleury said, flashing his trademark grin. "There have been a lot."

Talk to Fleury's teammates past and present and they'll tell you it's that mischievous sense of humor and easy-going personality that have helped put the veteran goalie on the cusp of an impressive milestone.

With one more victory, Fleury will become the 13th goaltender in NHL history with 400 wins. Vegas has 14 games remaining in the regular season, so he has a shot at surpassing Chris Osgood (401), Grant Fuhr (403) and Glenn Hall (407) and leapfrogging into the top 10 in the final four weeks.

Of course, by that time, yet another unsuspecting victim in the Vegas dressing room likely will have fallen prey to one of Fleury's much-ballyhooed pranks.

Golden Knights defenseman Shea Theodore, for one, has been on the wrong end of one of those. Earlier this season, Fleury tied empty bottles to the bottom of Theodore's car. When Theodore heard rattling coming from the undercarriage of his vehicle while driving to the airport, he thought there was a serious mechanical failure.

In reality, it was just Fleury being Fleury.

"I think that's why he's been able to have as much success as he has. He's always having fun like that," said Penguins center Sidney Crosby, Fleury's close friend and his teammate with Pittsburgh for 12 seasons. "For him, it's still as much a game as a business."

For the record, Crosby is familiar with the stunt pulled on Theodore. Fleury did the same thing to Pittsburgh center Evgeni Malkin during his Penguins days.

"Besides, you don't see many goalies enter the NHL at age 18 anymore as he did."

Fleury was selected No. 1 in the 2003 NHL Draft, the third goalie to be the top pick. Michel Plasse (Montreal Canadiens, 1968 NHL Draft) and Rick DiPietro (New York Islanders, 2000 NHL Draft) were the others.

In the subsequent 12 seasons, Fleury rewarded the Penguins for their confidence in him. He was a member of three Stanley Cup championship teams in Pittsburgh (2009, 2016, 2017) before being selected by the Golden Knights in the NHL Expansion Draft on June 21.

After getting 375 wins with Pittsburgh, Fleury has 24 with Vegas this season. The Golden Knights visit the Philadelphia Flyers on Monday (7 p.m. ET; SN, NBCSP, ATTSN-RM, NHL.TV).

Fleury said the two names at the top of the list always catch his attention: Martin Brodeur (691) and Patrick Roy (551).

"Those two guys are from the province of Quebec like me and they were guys I grew up looking up to," Fleury said. "There are other guys on that list too from the 1990s that I used to watch like Ed Belfour (484) and Curtis Joseph (454).

"Now I see their names on the list and to think I'm up there, it's flattering and kind of unbelievable."

In the meantime, don't expect Fleury to focus too much on the 400 milestone. There are two many laughs to be had.

On Saturday, for example, Vegas forward David Perron was the first man up in the shootout against the Sabres. As he approached the puck at center ice, Perron suddenly started laughing and had to back off at the last moment.

The source of Perron's distraction came via Fleury, who shouted that his teammate should not fool around and use the fancy deke he'd been showing off in practice.

"That's what he does. He gives our team confidence in so many ways, whether in his play, his advice or keeping everyone loose," Vegas coach Gerard Gallant said.

In terms of keeping his teammates loose, Fleury says the greatest prank is yet to come.

"My best practical joke since I've been in Vegas? It's in the planning stages right now," Fleury said, breaking into a wry grin.