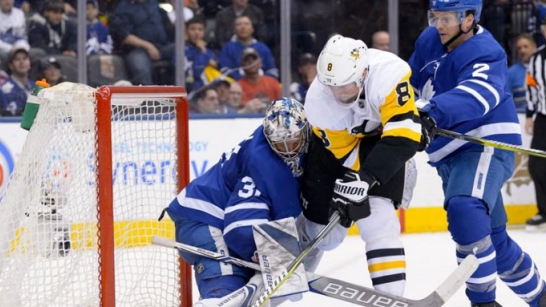 Sorry folks, there is no simple, straightforward, one-stroke-of-the-pen solution to the NHL’s goalie interference problem. As much as people from Mike Babcock to Jeremy Roenick are shrieking “Fix it!” and making noisy headlines, it’s just not that simple.

It’s taken the better part of three decades for the league to gradually create this thorny problem, and now there’s just no simple means of undoing all that’s been done. There are layers of history to this, and a league that always prefers elastic rules to black-and-white regulations isn’t going to be able to fix the controversial problem by this year’s playoffs and probably not by next season, either.

Remember, the league once had a relatively ironclad crease rule. Not even a baby toe in the crease was allowed. But people found it too nit-picky, and when Brett Hull scored the Stanley Cup winner in 1999 with his foot clearly in the crease, forcing NHL officials to simply make up a rules interpretation after the fact, it signalled the end of that method of litigating crease congestion.

Had that happened last spring, the guess here is the NHL would have stuck with the rule. As Gary Bettman’s regime has gained confidence over the years when it comes to changing rules, it has become far more immune to the criticism that always accompanies any kind of change in this conservative sport. Remember all the bellyaching about new slashing regs and faceoff rules last October? The league simply stuck with it, and by Christmas all the whining had disappeared.

But back then the league bent, and the toe-in-the-crease rule vanished. Over time, the NHL also found it had a goal-scoring issue, and gradually decided to allow more contact in the crease as a way of creating more offence. Not everybody liked it, but it was going along in a generally satisfactory way until Bettman’s administration made the fatal decision to start using video replay to adjudicate goalie interference calls.

It’s been a disaster ever since. Even worse, now that the NHL has gone down this path, there is no way for it to retrace its steps.

Replay on goalie interference calls has done two things. First, nobody dares celebrate a goal any more until everyone’s had a chance to study the replay on their tablets. Talk about robbing the game of spontaneity and excitement.

The NHL rule that creates the fewest arguments is the one which gives a minor penalty for shooting the puck over the glass in a team’s own end. There is sometimes debate over where the puck actually left the ice surface, but none of the usual “How can you call that now?” or “You didn’t call the same penalty on them” nonsense that we hear about most other calls.

It’s black and white. Shoot the puck over the glass, it’s a penalty.

The toe-in-the-crease rule was designed to be like that. Except Hull, apparently, was the exception to the rule. So that killed that. And can you imagine the ridicule the NHL would be exposed to if going back to that rule was ever suggested?

So, no black-and-white rules. That’s out because the NHL prefers mushiness. And if it was proposed to no longer use replay review on goalie interference, it wouldn’t matter anyway now since teams have video equipment on the bench, replays of controversial plays are shown in the arena on giant scoreboards and viewers at home can watch and rewatch any play they want.

You can’t just flick the switch and make replay go away.

So, what’s the answer here? Sadly, there isn’t one.

The best the NHL can do is tell coaches and players to tone down their criticisms. Shut up or be fined. When you get calls like one last week that went against the Maple Leafs in Buffalo and then another on Saturday that went in their favour, teams are just going to have to suck it up and accept that some calls will go their way and some won’t.

Not much of a solution.

Saturday night’s call against Brian Dumoulin of the Penguins for carrying the puck into the Leaf crease and brushing into Freddie Andersen before shoving the puck across the goal line seemed particularly strange. That’s been a good hockey play as long as there’s been hockey.

But the officiating staff thought otherwise — there’s that subjectivity again — and not only disallowed the goal but gave Dumoulin a penalty as well. The Leafs scored on the ensuing power play, making it all seem even worse.

Pittsburgh had a right to be outraged, but no more so than the Leafs six nights earlier against the Sabres.

Everybody’s upset when the call goes against them, but unless teams are willing to agree to go to one of two extremes there’s no way around this.

Anything in between will always create endless debate. The problem when people call for a solution is that we all tend to look at individual cases, while the league has to create and enforce rules designed to apply to all instances.

Hockey people say all they want is consistency, like they’re just asking for common sense, but achieving consistency on goalie interference calls that all seem just a little different than the last one isn’t easy to achieve. In fact, it can’t be achieved.

Moreover, many of those howling for consistency are coaches encouraging their players to create as much contact in the crease as possible without getting whistled, or players who only notice when a call goes against their team.

The league is the only stakeholder which has to look at what 31 teams need. But what most teams “need” is whatever benefits them today, which may be the opposite of what benefits them tomorrow.