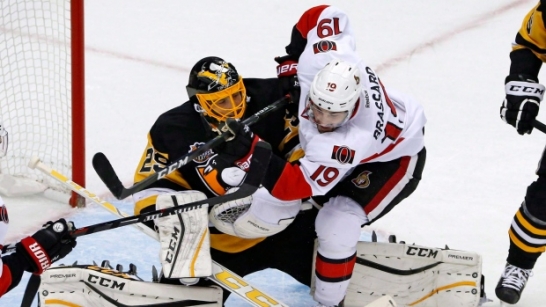 The nebulous interference rule, a point of controversy all year long, is a ticking time bomb that threatens to spoil a team’s Stanley Cup hopes:

The NHL playoffs begin on Wednesday, as the remaining 16 teams get set to begin what they hope will be a two-month journey towards the Stanley Cup. It’s a great time to be a hockey fan.

But this year, there’s a cloud hanging over everything. A controversy over the league’s goaltender interference rules has flared up periodically all season long, especially down the stretch. And that has fans wondering when – not if – a key game is going to be determined by an interference call that everyone hates.

So what’s the problem, and what if anything can the NHL do about it? Let’s dig into it, Q&A style.

So what is goaltender interference?

Goaltending is a tough job. You’re expected to stop pucks that can be traveling 100mph. Opposing players are constantly buzzing around you, or planting themselves in front of you to block your view. Those players will also occasionally hack at a puck you’re trying to cover, or bump into you as you’re trying to establish position. And occasionally they’ll just slam right into you at top speed, knocking you flying.

Some of that is legal. But a lot of it isn’t, and the goaltender is supposed to be given a certain amount of protection by the referees. For that reason, there are various rules about what the opposing players can and can’t do, and if they violate those rules in the course of scoring a goal, it’s not supposed to count.

So far so good. Where’s the problem?

For years, goaltender interference was a call that could only be made by the referee on the ice. That generally worked fine, but there were cases where it felt like a call got missed. For example, here’s a play from 2010 in which a player outright steamrolls a goaltender, and the goal somehow still stands. Those sorts of plays were rare, but when they did happen there was no remedy. Surely, many of us figured, there had to be a better way.

And so, beginning with the 2015-16 season, the league added replay review for goaltender interference. Coaches could ask for a review if they felt an interference call had been missed, at the cost of a timeout if the play was upheld.

The idea was that this was a way to catch those obvious misses. It’s a tough call to make in real-time and we have the technology to take another look, the thinking went, so let’s get it right.